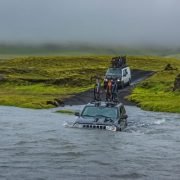 “Undo your seatbelts and wind your windows down” My tired mind was trying to process this instruction, as the 4×4 we were in the back of began to lose traction and float, still 15 metres from the safety of the river bank. The river in question was a freezing cold, swollen Icelandic river and I really didn’t feel like some wild swimming at that point. Bryan looked gripped and our Icelandic hosts weren’t grinning anymore – a certain sign that we might be in a spot of bother. 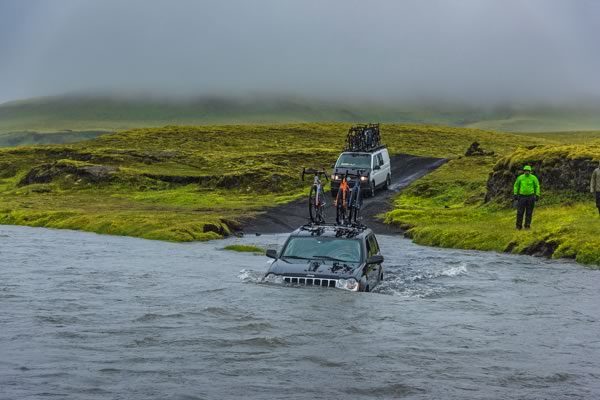 We were somewhere near Landmannalaugar, a couple of hundred Km east of Reykjavick, being entertained by Lauf, as part of the launch of their new True Grit gravel bike. We’d spent the night in a small mountain hut (sort of a big, posh bothy) while a storm did it’s best to blow the roof off and wash us away. There were 20 or so in the party – bike journos, racers, event organisers and the ever-smiling boys from Lauf. We’d ridden the True Grits there (or at least most of the way there) over two days. There was no bikepacking minimalism/misery involved though – we had a support convoy of 4×4’s and a VW Transporter (T5.1, 180BHP 4 Motion for the Dubfans). In the van had been crates of delicious food and pallets of Icelandic ale. The decision had been made over dinner that we’d be driving out, not riding, so no-one was holding back on refuelling and re-hydrating. After all, we had to make room in the van and it would be impolite not to at least try to match the drinking of the locals. 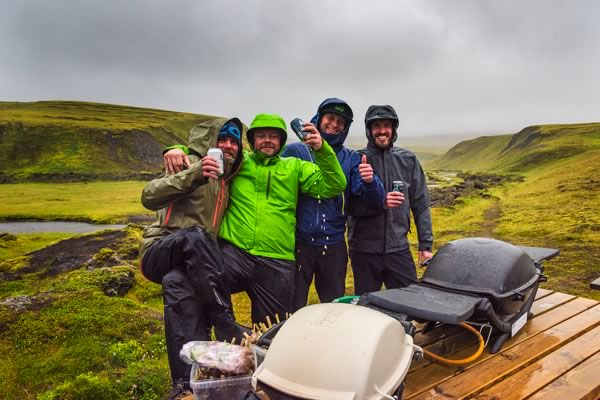 Bryan and I had arrived, from Glasgow via Luton, on the Monday morning after the Grinduro UK weekend on Arran. We were picked up from the airport, whisked to Ryekjavick, loaded into 4×4’s and driven to a road head car park near Hekla, one of Iceland’s most active volcanoes and known in the past as ‘The Gateway to Hell’. Well if this was Hell, I was making a resolution to be a much naughtier boy in future, because this place is heavenly. In the car park we were given a True Grit to ride – all size Large test bikes, pre-fitted with different stem and saddle combinations to make everyone comfortable. Along with the bike came a chunky Icelandic wool cycle sweater and little bottles of Aquavit (little did we know, stood there in the sunshine, how useful these items would become). 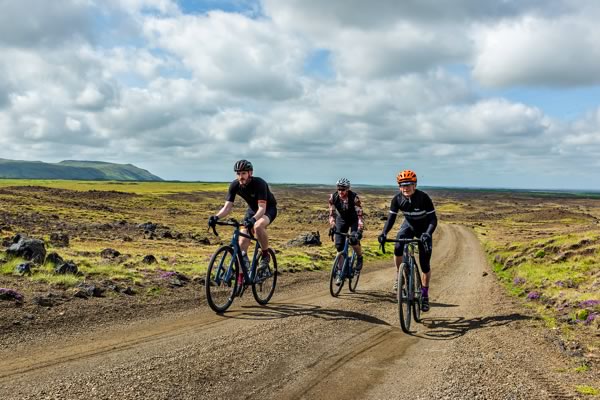 We saddled up and headed out, across a landscape that looked other-worldly, but strangely familiar. Lava fields, lawns of moss, cinder plains and stream-riven mountains all punctuated at regular intervals by, thankfully shallow, braided rivers. We were briefed that there would be 22 river crossings on the first day, but “only two are deep”. Nae bother, the sun was out, the company good and the bikes were superlight and lively, making up for our ‘Grinduro hangover’ weariness. With full carbon frames, refined Grit suspension forks, American Classic wheels and 1×12 E tap gearing, the bikes were a riot to ride. You did have to concentrate on the sometimes loose surface though – a front wheel wash out onto the cinder was like falling onto a parmesan grater (as I soon discovered). Keeping your eyes on the trail when surrounded by that scenery was a proper challenge though. The reason for the familiar look to the land was that, geologically speaking, it’s only a couple of blinks behind Scotland or the Lakes – smooth some lines and cover it in grass, heath and a few trees and we were ‘back home’.
One thing that was definitely very different was the language. There was no chance I was following native conversation. Luckily everyone spoke English and the important signs were subtitled. This is Hekla Volcano – to continue is to risk death OK, let’s crack on…..
We rode all afternoon, with a Lauf style feed stop. Hot dogs with awesome ‘Cronions’ (crispy onions), beer, crisps, cake, coffee and beer. I say afternoon, but it was probably evening too, or even night. It didn’t get dark. We rode about 80Km. Accommodation was a private hostel, with bunkbeds, heaters and the afore mentioned catering bus full of goodies. After dinner was a short drive to Langmannalaur hot pools for a dip and some beer, then back to a cave for a fire, some beer, much singing and some more beer.
Waking up on Tuesday morning (or was it afternoon, or evening? and Christ was it only Tuesday?), it was clear the weather had plans. Driving, squally rain was driving the groups in surrounding hostels to pack up and head back to Reykjavick. We saddled up and pedalled out to the first river crossing – “If we can cross that, we’ll be fine”. Some rode, some waded, one took a swim, but we crossed. The next few hours got increasingly windy, increasingly wet and even got dark. One by one, riders bailed and got into vehicles. The river crossings got more and more interesting and the landscape awesomeness gauge held it’s needle at 11. Finally only Head Laufer Bennie was still riding. Us heavier chaps fared better than the racier whippet types and the True Grit bikes were certainly too light to let go of. Keeping the front wheel facing in the right direction was a struggle and at one point my 14 stone carcass was almost lifted off the ground, to be dumped into the mossy rock debris. Fun doesn’t start to cover it (whether it was Type 1 or Type 2 fun depends on who you asked).

We finally made it to the overnight hut, where this account began, via some very marginal river crossings. As it poured down all night and the flood warnings poured in, us non-Icelanders were blissfully unaware that the escape route in vehicles meant re-crossing those, now rapidly rising torrents. By lunchtime on Day 3, we were down to one vehicle (not really sufficient for 20 adults plus kit) and had abandoned two 4×4’s, a VW van full of food and beer and 16 slightly less shiny test bikes on a new island. After a bollocking from a couple of National Park warden ladies, and a few phone calls for help, we made it back to Reykjavick, via more Cronions and beer. A most excellent adventure.
Thanks to Lauf for the invites, the amazing riding, brilliant bikes (professionally reviewed elsewhere) and peerless hospitality. All photos by Arnold Bjornsson @arnoldmyndasmidur 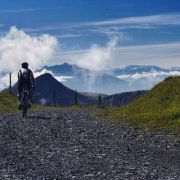 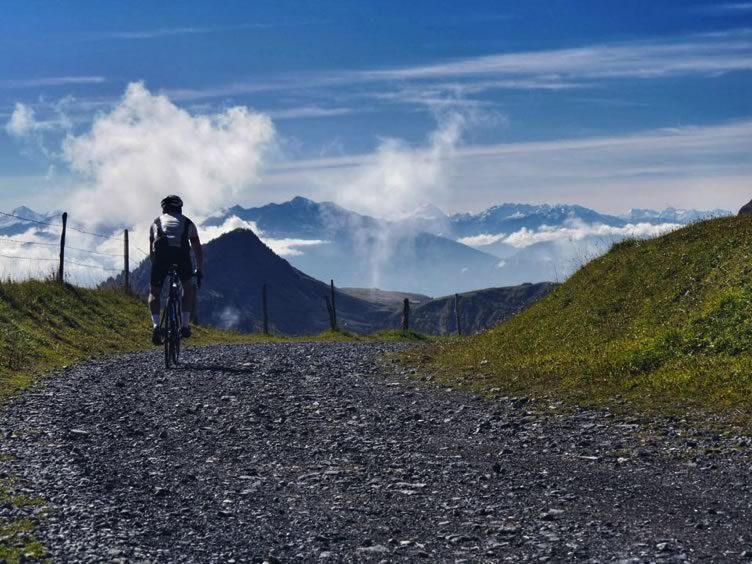 It is a common trait that those who organise events for a living do so as a result of their own love of attending events. I am not any different. For me the joy is scouring social media, blogs and other sources of news and finding the new or stand out events. I have no idea how I came to know about La Resistance (https://www.laresistance.cc) but I did so initially too late to take part in the first edition, post event reporting mean’t I wasn’t going to miss out again.

Luckily ahead of the event I got to be part of a recce of the longer Tour de La Resistance course, a 3 day bikepacking version, so I was well prepared when the real event rolled around.

First of all, lets outline where La Resistance sits in the ever broadening spectrum of ‘Gravel’. We all know gravel racing and riding originates from the mid-west of the US where there is a huge network of gravel roads that host the oldest and largest events in the world. When gravel migrated to Europe and on the whole these gravel roads were not in abundance a new outlook had to be formed on what ‘gravel’ meant. The La Resistance course offers what I think is the best version of alternate gravel, a course that on the whole is not suited to either road bike or mountain bike. There are sufficient sections of road that a mountain bike will be slower but conversely these road sections are matched with sections of gravel track so a road bike can never rule the day entirely.

So we know where La Resistance sits in the spectrum of gravel, but where geographically. Talloires, the home of Basecamp (the business founding the event), sits beautifully on Lake Annecy surrounded by elevated peaks and a host of riding potential. 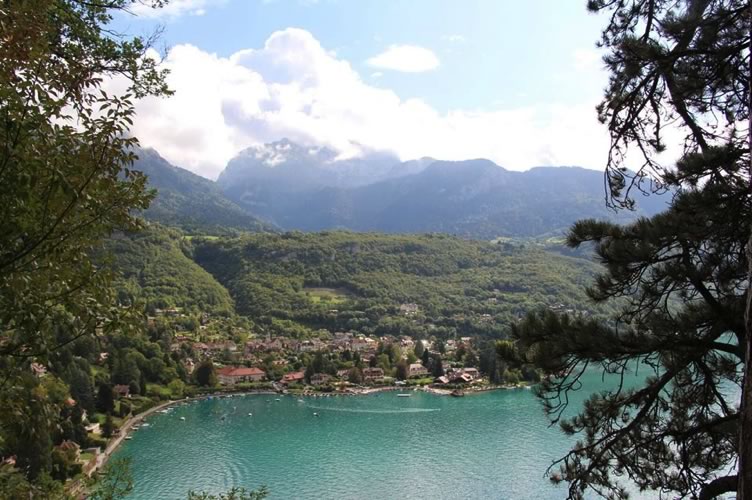 The event itself starts on the shores of the lake, heading out south before making a turn to start the first col, Col De L’Arpettaz. With a mixed field of on and off-road riders there is an optional gravel/off road section at the start before the Col, naturally on a gravel bike this had to be ridden.

The Col itself presents a sustained road climb of close to 15km gaining 1165m of height as you climb to the first check point and feed station just short of 40km in to the course. 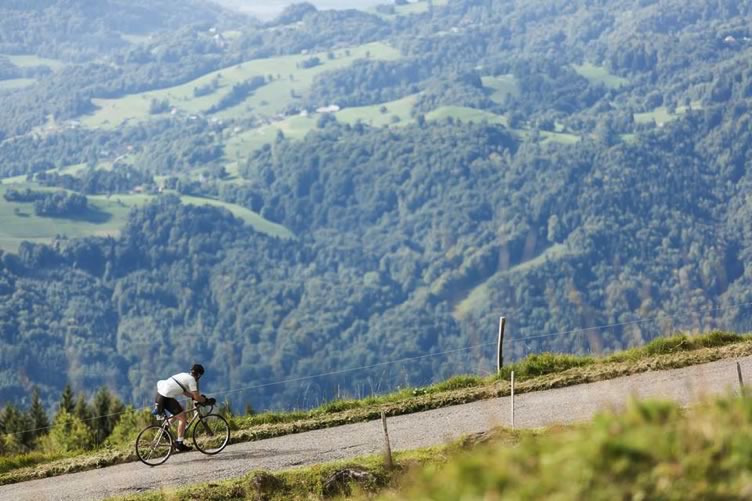 So far, the course had switched in equal measure between on and off road so the next section was again to be off road, Route de la Soif. 14km of undulating mountain gravel road slowing down the narrower of tyre and allowing the gravel and mountain bikes to stretch their legs again. The gravel section fires riders out at checkpoint 2 and the one of the highest parts of the course a top the Col de Aravis. From here you need to add a layer or 2 as the descent in to the valley is near 10km long. 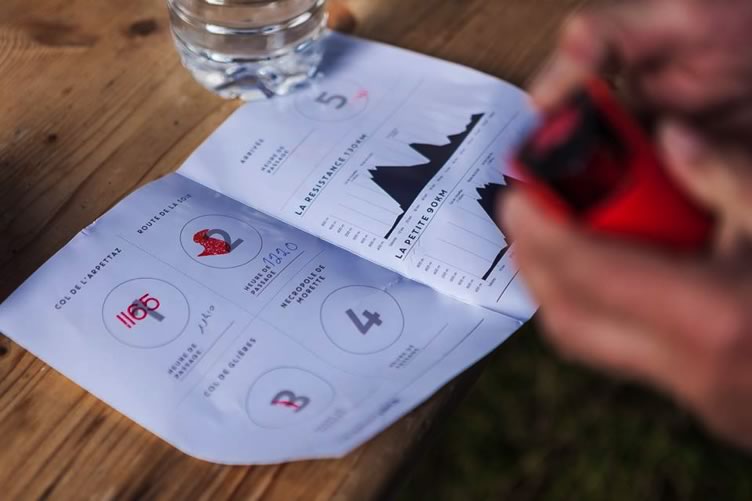 Just as you feel like the descending is never going to end, it does and abruptly. We reach the climb that stands out in infamy amongst all reports of the previous year’s event. Col des Glieres, this climb is a mere 6.8km long achieving a height gain of 660m but the average 10% gradient is the killer. The tarmac climb winds its way up the hillside with some of the more severe pitches of gradient being delivered on the longest straight section of the climb.. As the tarmac ends at the refuge near the top the gravel takes overs to take riders up the final pitch. 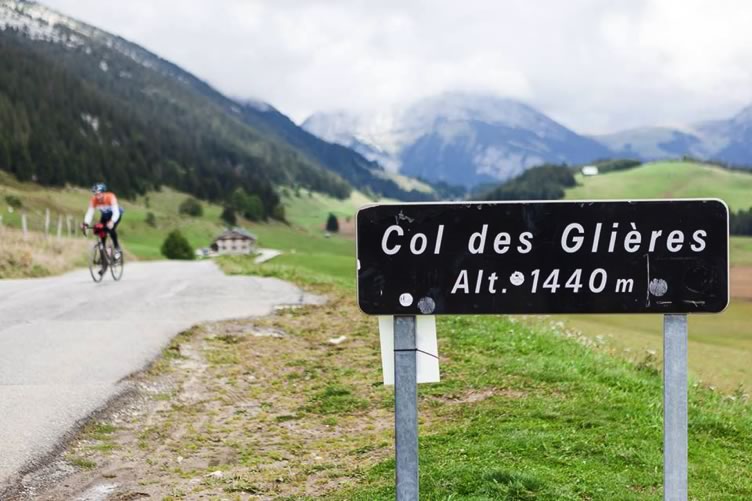 From the top you look across the meadow which is where you find the Monument de La Resistance, the reason for you being here as it is the inspiration behind the event. Erected as a tribute to the French resistance fighters of the second world war and home of another check point and feed.

Another long descent shaves off the previous climbs elevation gain and the riding is now more undulating with fewer sustained climbs and descents. The last feed and a checkpoint is located at La Necropole de Morette, another significant monument to the war effort in this region. 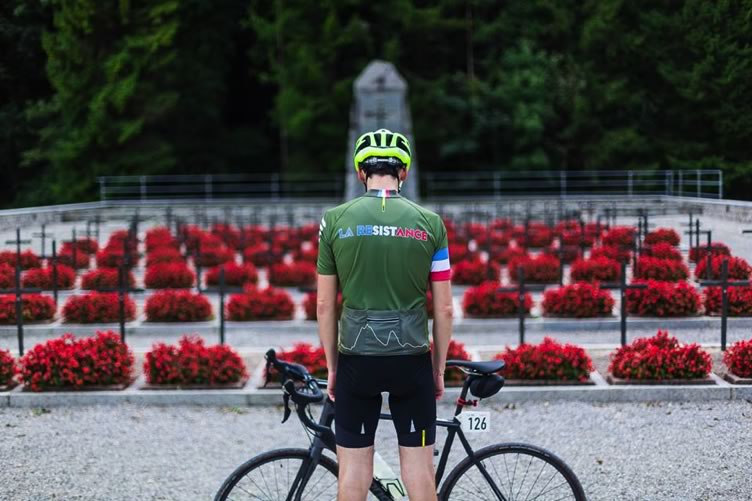 From this point the end is close and soon you are descending toward the lake. A final check point at Basecamp Café and a roll to the lake shore and finishing line, 130km ridden and 2800m of climbing achieved.

La Resistance posed the perfect challenge of mixed surface riding amongst beautiful landscapes whilst absorbing the history of the region. It’s a stand out event we feel should be on everyone’s must ride list … roll on 2018 edition.